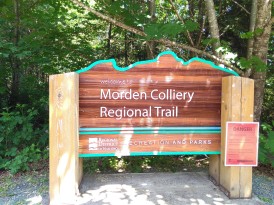 The weekend was sunny and bright, and we decided to check out the Morden Colliery Regional Trail. This walking path runs through the Morden Colliery Historic Provincial Park, and is maintained by the Regional District of Nanaimo. The park and trail are on the original site of the Morden Mine, a coal mining operation which was active periodically between 1912 and 1930.

In 1908, the Pacific Coast Coal Mines Company was formed to prospect for coal, purchasing mineral rights from early South Wellington settlers. About two kilometres north of the South Wellington townsite, the PCCM operated the twin slopes of the Fiddick and Richardson Mines together as the South Wellington Colliery from 1908 to 1917. Boat Harbour opened as the company’s shipping point in 1909, with a rail line running from there to South Wellington.

The Fiddick Slope of the South Wellington Colliery was the site of the terrible flooding disaster of 1915, when the abandoned Southfield Mine workings were accidentally broken into due to an error in scale on maps. The mine rapidly flooded, killing 19 miners – a tragedy that must have shook the small community to its very core.1

Ground at the company’s nearby Morden Mine site was broken in 1912. This new mine, with PCCM’s Slopes No. 3 and No. 4, didn’t operate fully until after the Vancouver Island Miners’ Strike ended in August 1914. The company used its existing railway to transport Morden coal to Boat Harbour for shipment. Unlike other mines in South Wellington, which had walk in, slope entrances, Morden was accessed by a deep, vertical shaft. This required a massive 22.5 metres tall head frame for hoisting coal up from deep below. The head frame and tipple were built of reinforced concrete, a first in the district. Surface mining structures of the day, including the head frame of Morden’s secondary air shaft, were typically built of wood. The main shaft’s concrete head frame is the one that’s still standing tall at the site today.

Despite the mine’s modern equipment and the company’s hopes and investments, Morden never proved to be a very successful mine.2 By 1921, only one man was employed as a watchman. In 1922, the mine was closed and flooded, and the PCCM went into voluntary liquidation. In 1930, Morden was briefly reopened by the Canadian Coal and Iron Company, but this also proved to be unsuccessful, closing later that year.

The Morden site was designated a provincial historic park in 1972, but for many years its story was not well told, with apparently no signs or plaques at the site. In 1995, the Regional District of Nanaimo started to develop the trail, and since then several interpretative signs have been added, and a significant miners’ monument was erected in 2017. This cairn not only memorializes the three men who died at Morden3 but the estimated 1,000 miners who died in Vancouver Island coal mines.

The impressive concrete head frame and tipple at Morden is a precious tangible remnant of Vancouver Island’s coal mining past. The structure is one of only two of its type in North America (the other one is at the O’Gara No. 12 Mine in Muddy, Illinois). For many years the site’s champions have been the members of the Friends of Morden Mine group, which has tirelessly advocated for funding and a more active preservation plan for the degrading heritage structure. Despite many attempts, the society has not been able to convince any level of government to fund what would be a costly restoration project. The society almost disbanded in 2015,4 but passionate volunteers can still be found at local heritage events. Their cause is a worthy one in my mind, and it will be a real shame when the head frame finally comes crumbling down.

An interpretation of the iconic looming head frame was captured by local artist Patrick Belanger for Nanaimo’s Canada 150 celebration banners which were hung at major intersections around the city. The head frame and its adjacent tipple have also been replicated at the other end of the Modern Colliery Regional Trail at Cedar Road, with smaller wooden versions standing in tribute at the trail head.

Currently, the two parts of the trail are bisected by the Nanaimo River, but there has been talk for some time about a walking bridge to connect them. The Regional District of Nanaimo supports the connection in the parks section of its Area A Official Community Plan.5 I hope this eventually happens! It would be a great way to tie the neighbouring communities of Cedar and South Wellington together.

The part of the trail at Morden follows the old PCCM rail grade, and is an easy walk through the natural forest. I was somewhat surprised to come across a small piece of rail next to the path. It’s easy to walk right by without noticing, so keep your eyes peeled. My sons loved the two wooden bridges, and easy access to a small pond which was home to tadpoles in various stages of metamorphosis. The trail ends at a great view of the Nanaimo River, and we instantly wished we had brought along some drinks to enjoy at the cleverly placed bench overlooking the view.

Heading back to the parking lot, we circled around the head frame and tipple on the Miners Loop Trail. I loved seeing the structure looming through the trees from different 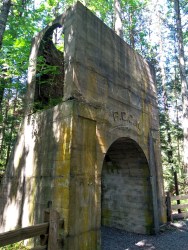 points on the path.  In the trees not far away, the PCCM arch with a crumbling 1913 date is all that remains of what was a 60 foot smokestack of the boiler plant which powered the mining operation. I know a couple who had some of their wedding photos done there, and I have to say, I’m a little disappointed that I didn’t think of it for myself – especially because I grew up in South Wellington.

Overall, the whole family really enjoyed this trail, and I know that we’ll be back. We only saw two other groups the entire time we were there, so it seems like Morden is a bit of a little known secret. You’ll definitely enjoy the walk, but the site’s history is also pretty interesting – go explore it for yourself!

1. For more background information about the Pacific Coast Coal Mining Company, and about the February 1915 flooding accident in the Fiddick Slope of the South Wellington Colliery, including the subsequent investigation and charges see: Morgan, R. (2015). A tragedy of errors. Ladysmith & District Historical Society. Retrieved from: https://www.ladysmithhistoricalsociety.ca/histories/mining/a-tragedy-of-errors/

2. Interviews conducted with Vancouver Island coal miners as part of the Coal Tyee History Project, include speculations about Morden’s untapped riches. Lewis Thatcher, a long-time South Wellington resident, thought, “There’s about 15 or 1,600 acres of the Morden coal still there.” Experienced coal miner Nelson Dean thought, “Way out at Cedar district there’s plenty of coal under there, where Morden shaft was in the wrong place, really. … It should have been over by the Wheatsheaf Hotel.” When his interviewer asked about whether Dean thought the Nanaimo area was mined out or not, Dean replied: “There’s a lot of coal left here. Underneath the Wheatsheaf Hotel? Right underneath there, there’s a lot of coal there.” Audio recordings and transcripts of the interviews are available in VIU Library’s VIUSpace at: https://viurrspace.ca/1063/171 (Thatcher) & https://viurrspace.ca/10613/139 (Dean).

In a section about Morden in a book by Vancouver Island mining historian Tom Paterson, one expert speculates that the coal field at Morden had been hugely underdeveloped and may in fact be worthwhile reworking. “There are approximately 1,800 acres of coal lands in the Morden property. Only 70 acres have been worked… From the 70 acres that has been developed approximately 7,000 tons of coal per acre has been extracted. If it could be proved that even 1,000 acres of the remaining 1,700 [sic] could produce 7,000 tons per acre, this would mean 7,000,000 tons of coal.” While it is also pointed out that the expense of following up on this speculation would make it highly improbable that Morden would ever be reopened, one can’t help but wonder… Paterson, T.W. & Basque, G. (1989). Ghost towns & mining camps of Vancouver Island. Surrey: Heritage House.

4. Cunningham, T. (2015, May 12). Society ends fight to save Morden Mine. Nanaimo News Bulletin. Retrieved from https://www.nanaimobulletin.com/news/society-ends-fight-to-save-morden-mine/

Despite this article, I’ve discovered the society didn’t actually disband. For additional details about the Friends of Morden Mine, see: https://www.mordenmine.com/