With their new book, Around the World in a Dugout Canoe: The Untold Story of Captain John Voss and the Tilikum, maritime historians John M. MacFarlane and Lynn J. Salmon have attempted to set the record straight about one of the west coast’s most misrepresented seamen, Captain John Voss, whose reputation as a master mariner has been questioned for over a century. 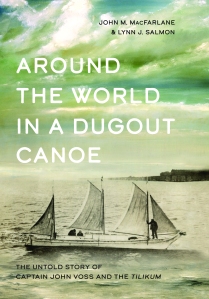 Setting sail from Victoria in 1901, Voss spent the next three plus years and 40,000 miles completing an epic journey around the world in the Tilikum, a converted Nuu-chah-nulth cedar canoe. Covering the Tilikum’s voyage from Victoria to the Pacific Islands, to Australia, New Zealand, South Africa, Brazil, and finally to England, this book is an opportunity to step on board with Voss and his revolving door of first mates as they adventure around the world.

While Voss and the Tilikum were greatly admired by contemporary followers, the damaging allegation that Voss murdered the second of his mates in a drunken fight has been a shadow on his legacy that even time has had trouble erasing.

This book is an effort by MacFarlane and Salmon to counter the existing body of inaccurate and distorted information about Voss and his voyage, and to present a more complete account of what really happened. The authors drew from years of careful and critical research, during which they consulted newspaper accounts from around the world, as well as archival material, photographs, and testimonies to piece together as much information as possible about the Tilikum’s journey. Their research also included close readings of both John Voss’ and Norman Luxton’s (Voss’ initial first mate) books about the voyage. Details from these contradictory accounts are carefully considered, compared, and questioned by MacFarlane and Salmon.

Around the World in a Dugout Canoe sails smoothly from opening background chapters about Voss and Luxton to ones on the Tilikum’s preparation, departure, and major stops. A significant number of pictures from a variety of sources thoughtfully highlight the text, and the book is written in such a way that even landlubbers are able to wade through the nautical jargon – especially with the help of a glossary found in the back of the book.

MacFarlane and Salmon have done an excellent job of taking readers along on the Tilikum as Voss and his mates face multiple challenges. We experience the panic of getting down to the last few gallons of water, the hunger felt by Voss and his crewman as the food supplies run low, the endless monotony of the open sea, and the unpredictable and extreme weather conditions. The fragility of a journey that could have come to a tragic end at any moment is conveyed, while the constraints of the extremely limited space and the burden of constant companionship are easily understood. It’s no wonder that while Voss was dedicated to his goal of circumnavigation, he spent significant amounts of time onshore throughout the journey.

Not only was it fascinating to read about the celebrity status Voss and the Tilikum achieved at ports of call around the world – drawing in huge crowds to see their arrival, hear Voss’ lectures, and watch their departure – but it was also interesting to learn more about how Voss was a forefather of challenge-based long-distance recreational sailing. Throughout the years, journeys like the Tilikum’s have inspired countless individuals to attempt record setting voyages.

In one of the concluding chapters of the book, we leave Voss behind in England, and we follow the Tilikum herself through her descent into disrepair and her eventual repatriation to Victoria. After being carefully restored, the Tilikum was showcased proudly in her home province – first in Thunderbird Park starting in 1941, and then from 1965 to 2015 in the main gallery of the Maritime Museum of British Columbia.

While the Tilikum is currently in storage at the Ogden Point passenger terminal in Victoria, the media is reporting that the Maritime Museum of British Columbia has a plan to relocate to a new home in Langford. One hopes that the new location will mean that the Tilikum, an important piece of the province’s nautical history, will once again be accessible for the general public to enjoy in all her glory.

In the meantime, anyone interested in learning more about the Tilikum and Captain Voss will certainly enjoy reading this book.